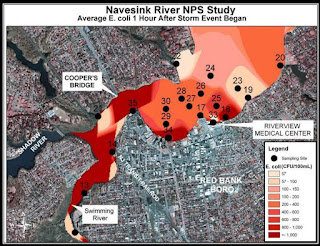 COA is conducting an extensive investigation into the serious water quality problems in the Navesink River. The water quality improvements made in the Navesink during the 70’s, 80’s and early 90’s have plateaued, and are now deteriorating. This past January, the NJ Department of Environmental Protection (NJEPA) downgraded over 500 acres of the river to “prohibited to shellfishing” due to bacteria (fecal) contamination. This is an expansion of the previously prohibited area and is of great concern. In addition, the US Environmental Protection Agency lists the Navesink as impaired (exceeding the amount of a given pollutant) for chemicals such as PCBs and DDT, and low amounts of Dissolved Oxygen due to excess nutrient loading, as well as high levels of pathogen indicator bacteria.

Therefore, according to NJDEP and USEPA, the Navesink river is unsafe for swimming in or paddling on after a rain event, and clammers should check new maps (visit: www.nj.gov/dep/bmw/) for safe areas. There is no question that the Navesink River is in trouble and the water quality is deteriorating. Clean water is essential for the life of the river, the community and the economy.

COA is in the process of developing an action plan to identify specific local, state and federal steps needed to address water quality issues, and will build a coalition of diverse citizens including fishermen, boaters, water sports, business, and community leaders to halt and reverse the decline of the Navesink. As an aside, a separate proposal to create a National Marine Sanctuary in the region is circulating. As COA’s sole focus is on improving water quality, we are not involved in this proposal. Any consideration would require a thorough evaluation and approval by COA’s Board of Trustees.