For background information on the ongoing menhaden die-off in the Navesink and Shrewsbury Rivers, see COA's blog post from April 2, 2021. 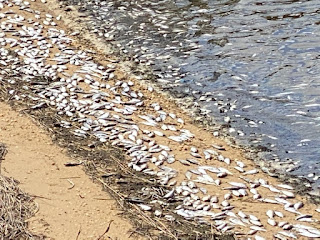 In response to a letter COA sent to Commissioners of the New Jersey Department of Environmental Protection (NJDEP) and NJ Department of Health (NJDOH) on April 16, 2021.

NJDEP responded the next day to set up a meeting on April 19, 2021. NJDEP assembled all the key program top level directors and lead staff for the discussion. Here are some updates from the meeting:

We applaud and appreciate the swift and detailed briefing from the NJDEP and will continue to follow-up and provide input.

However, COA continues to urge that the NJDEP and NJDOH host a joint virtual public forum to update citizens and provide a means for questions and answers. COA has also reached out to Senator Vin Gopal, who is working to address the problem.