According to the NJ Department of Environmental Protection (NJDEP), a Vibrio bacteria specific to fish, not low dissolved oxygen, is causing the current menhaden (aka bunker) fish kills in New Jersey including in the Navesink and Shrewsbury River area.

Until recently, the usual explanation for these events was hypoxic conditions triggered by predatorial fish. However, these events have occurred outside of typical hypoxia season which occurs in warm weather months. Moreover, the fish kills included observations of menhaden spinning before death. Recent findings from NJDEP confirmed that a neurological bacteria specific to fish is the cause of death. The Vibrio bacteria that is causing the fish to die, is most closely identified to Vibrio anguillarum. The NJDEP is conducting additional studies to confirm the species. Clean Ocean Action commends the NJDEP for diligently tracking down the cause.

Concern and call for action:

Menhaden are a keystone species for the food web. While few studies are available, they raise more questions. COA is calling for fast federal and state funding to research this Vibrio species, the effects to menhaden, other fish, and the food chain as well as other impacts and possible solutions. A task force should be established including state and academic researchers, fishing and environmental groups, other interested groups and citizens to help find answers and solutions.

Menhaden mortalities are chronic and last from weeks to over a month and are characterized by uncoordinated and erratic swimming behavior. Dying menhadens appear disoriented, and lethargic near the water surface, almost swirling in circles. During the fall of 2020, a similar mortality was observed in large numbers (tens of thousands) and was widespread off the coast of New Jersey including the Navesink River. Specifically, the kills spanned Newark Bay, Raritan Bay, Hudson River and the Navesink River, with one significant kill off Liberty State Park in Dec. 2020. Preliminary investigations made the following observations:

With similar fish kills being reported in other mid-Atlantic states of New York, Connecticut, and Rhode Island, NJDEP began a series of investigations on moribund fish samples, led by Dr. Jan Lovy at the Pequest Aquatic Animal Health Laboratory. Histopathologic evaluation, gross necropsy, microbiology, and genetic methods including virus isolation and bacteria evaluation were conducted to determine the cause of these menhaden kills. The NJDEP released a preliminary report in early 2021 which was updated with more recent findings in March 2021.

The results showed a common finding that affected multiple organs - hematopoietic cell degeneration in kidney and spleen, perivascular cuffs of cellular necrosis in liver, and hemorrhage with degenerative cellular changes in the brain. Brain tissue genetic evaluation conducted using sequencing indicated high levels of a bacterium, Vibrio sp. in all 30 fish samples. This Vibrio sp. showed the closest identity to Vibrio anguillarum in all the samples, and also the sequence was much higher in the brain than in kidney or spleen. These preliminary results definitely suggest that bacterial infection due to Vibrio sp. is a factor in the recent mortalities arising from neurologic impairment and malfunction. NJDEP is continuing its investigation with recent samples collected from the Navesink River and results are pending. 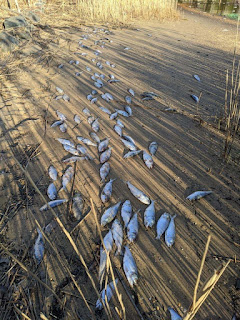 Vibrio anguillarum is a gram-negative bacteria commonly found in ocean and brackish waters during warmer temperatures (Spring to early Fall) and causes Vibriosis, which is a fatal hemorrhagic disease for marine and freshwater fishes such as Atlantic salmon, sea beam and rainbow trout. According to research, this bacterium secretes haemolysin RTX which is capable of lysing red blood cells. In addition to affecting red blood cells, different cells are affected and the immune system is weakened.

Clean Ocean Action is following up with NJDEP for updates and would like to acknowledge our observant citizen scientists – especially Oceanport Water Watch Committee and Two River Times – for bringing this to our attention.

Citizen scientist observers are needed to document this ongoing Atlantic Menhaden mortality event, and future events. Observations should be shared with the NJDEP through the WARN DEP Hotline: 1-877-WARN-DEP (1-877-927-6337). For more information on how to report fish kills, including a fish kill reporting form, visit NJDEP Division of Fish & Wildlife. This data will help to inform the NJDEP’s ongoing investigation into the cause of this mortality event. 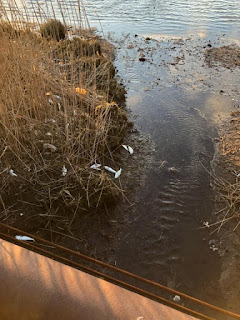 Posted by Clean Ocean Action at 11:21 AM