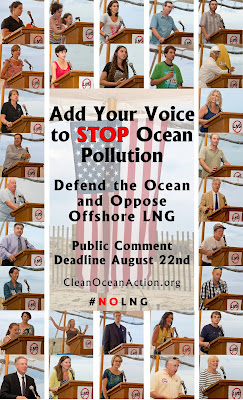 CLICK HERE to submit your comments to the federal government opposing Liberty Natural Gas's offshore LNG facility called Port Ambrose.  See below for sample topics and comments opposing the project.  Feel free to use the language and facts and make sure to personalize it.  Share this link with friends and family.

For organizations:  we also have a sample newsletter written below to include in your group's newsletter or online publication.  Please feel free to share!

To whom it may concern:

My name is ___________ and I am a resident of ____________.   I am writing to express my opposition to Liberty Natural Gas’s application to create a dangerous LNG port just offshore of the most densely populated metropolitan area in our nation.

In addition to the impacts Port Ambrose will have on the environment, commercial and recreation fishing industries, and the coastal tourism industry, my main concern is the security and safety of region.  Tankers filled with explosive gas just miles offshore would no doubt be recognized as a potential target and threat to national security.  An attack on a floating LNG vessel or port at the entrance to one of the busiest ports in the world would cripple the region and put countless lives in danger.

New Jersey Governor Chris Christie recognized this threat when he vetoed a previous identical proposal from Liberty Natural Gas saying, “the Liberty project would create a heightened risk in a densely developed region, including potential accidents or sabotage disrupting commerce…” Please heed Governor Christie’s warning and reject Liberty’s application for the safety and security of the region.  I appreciate your time and attention to this matter.

To whom it may concern:

My name is ___________ and I am a resident of ____________.   I am writing to ask that you reject Liberty Natural Gas’s application to create a hazardous LNG port just offshore of the most densely populated metropolitan area in our nation.

While Liberty Natural Gas claims the Port Ambrose proposal will create thousands of jobs, I believe this to be misleading.  According to Liberty’s application, Port Ambrose would generate only six to 10 permanent land-based jobs after the port’s construction.  I don’t believe putting our environment and coastal economies at risk are worth 6 permanent jobs, four more if the port gets deliveries (which similar ports in Boston haven’t gotten in years, and one just shut down because of inaction).

The coastal economy from Cape May, New Jersey to Montauk, New York is dependent upon a clean, pollution-free ocean.  By building a dirty fossil fuel facility, Liberty Natural Gas will put the recreation and commercial fishing industries as well as the local tourism industry at risk.  For example, the port will exclude commercial and recreational fishermen from high-value ocean areas during both construction and operation.  Also, in the event of a spill, accident, or explosion, there would undoubtedly be effects on the boating, diving, shipping and tourism uses of the ocean.  All of these industries, on top of this Liberty Natural Gas threat, are still struggling to get back on their feet after Superstorm Sandy.

Template 3: Environmental Impacts
To whom it may concern:

In addition to land-based environmental implications, security concerns, and economic shortcomings of this project, I oppose Port Ambrose because of the detrimental effects construction and maintenance will have on the marine environment.  First, the creation of the pipeline connecting the port to the existing transcontinental pipeline will dredge up over 20 miles of seafloor that contain critical marine life on which the ecosystem relies.  Additionally, the proposed port would discharge 3.5 million gallons of chemically-treated seawater used for pipe tests back into the water.  With the seawater intake for ballast, potential open loop thermal pollution, closed loop thermal pollution, and the potential for wastewater, stormwater, and accidental or incidental discharges ever-present in addition to dredging and chemical pipe test discharges, the negative impacts on the offshore environment are clear.

Lastly, I would like to raise the issue of the increasingly intense and frequent storms that the New York Bight is exposed to.  If LNG tankers were offshore when Superstorm Sandy barreled up the Atlantic, devastation from the storm could have been made much worse, considering wave heights offshore reached over 30ft, near the proposed location of the port.  The people of New York and New Jersey need to be exposed to the potential dangers of what an offshore LNG facility in the middle of a Hurricane could mean.

I appreciate your time and attention to this matter, and ask that you reject Liberty’s proposal.

Template 4: Bait and Switch
To whom it may concern:

Liberty Natural Gas, despite being proposed as an “import” facility, can legally petition the government to switch to exports once it has a license for imports – this bait and switch process wouldn’t trigger any public input, any further review, or any notice.  It is for this reason that I believe Liberty Natural Gas CEO Roger Whelan’s claims and Liberty Natural Gas’s application to be disingenuous.  With the price of natural gas overseas skyrocketing to levels six times higher than prices here, it only makes financial sense that a natural gas company would want this facility to export natural gas.  Liberty switching to exports, or even selling to another company that switches the license to exports, would lead to an increase in local demand for shale gas and ramped-up fracking in the region.

Our nation is too dependent on fossil fuels and dirty energy instead of focusing on renewable energy sources.  This port, if for imports, would lead to higher gas prices as we would have to compete with higher buyers overseas.  If for exports, which could be easily achieved once a license was secured, this port will surely drive up our gas prices and trigger an explosion of fracking – and the environmental impacts that result therefrom.  Neither use of the port is in the interests of the people of the region.

I appreciate your time and attention to this matter, and ask that you reject Liberty’s proposal.

To whom it may concern:
My name is ___________ and I am a resident of ____________.   I am writing to express my opposition to Liberty Natural Gas’s Port Ambrose application and to ask you to reject the proposal based on economic reasons.

This port, be it for imports or exports, would raise energy costs in the region.  The price for imported LNG is higher overseas, so If Liberty imports natural gas, they will be paying more for foreign fossil fuels.  To make a profit, they would have to sell the gas in the region at a higher rate.

If the port eventually exports natural gas, as is most likely because of the price tag for LNG overseas,  the demand and therefore price for domestic gas would increase as most of the gas would be shipped overseas.

I appreciate your time and attention to this matter.

This past June, the United States Maritime Administration announced that Liberty LNG has again applied to build a Liquefied Natural Gas (LNG) facility off the coast of New York and New Jersey.  The project, called “Port Ambrose,” would host massive natural gas tankers and will  lead to an acceleration of hydraulic fracturing in the northeast by opening up a gateway for LNG exports.  This project is the same project previously vetoed by Governor Christie in 2011; it may have a new name, but it is in the same place, and has the same impacts, dangers, and drawbacks. (Clean Ocean Action’s factsheet on the port is attached.)

The proposed location for the LNG port would directly interfere with the proposed New York State offshore wind lease area identified by the federal Bureau of Ocean Energy Management.  Additionally, in the past, LNG ports proposed in the NY/NJ Bight were met with vehement opposition from community and civic organizations, commercial and recreational fishing interests, faith based organizations, conservation and environmental groups, and thousands of concerned members of the public, including New Jersey’s Governor.  For this latest application, the coalition of interests aligned against Liberty LNG has grown.  During the July public hearings, hundreds of concerned citizens filled hearing rooms in Long Beach, New York, and Edison, New Jersey, and the beach in Sea Bright, New Jersey to voice their continued opposition to offshore industrialization.

If you are interested in joining thousands of citizens and the Governor of New Jersey in opposing Liberty LNG’s plans to put a hazardous industrial facility just off our beaches,  we ask that you go on the record in opposition of “Port Ambrose” by submitting official “comments” to the federal agency in charge of licensing these ports.  Comments and statements in support of clean ocean uses like fishing and tourism, and in opposition to this specific threat to our region’s economy, security, and environment, will be considered until August 22nd.  Public comments can be submitted online at http://goo.gl/7ye6uh or submitted by mail to the following address: Department of Transportation, Docket Management Facility, West Building, Ground Floor, Room W12–140, 1200 New Jersey Avenue SE., Washington, DC 20590–0001.