April 20th marked the 10th Anniversary of the BP Deepwater Horizon Oil Spill Disaster that devastated the natural resources of the Gulf of Mexico and the livelihoods of the surrounding coastal communities. This year, it was ironically the day that oil prices fell below $0 for the first time ever. An international oil supply war combined with stay-at-home restrictions due to the COVID-19 health crisis, created an oil glut, lowering the price of the fossil fuel into negative territory. 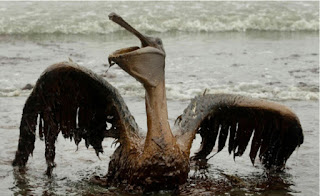 Recent scientific observations demonstrate the impacts of fossil fuel use. Air pollution has declined, showing the large impact fossil fuel use has on air and water quality. Noting the improvements to our air, now is the time to move away from fossil fuels and to pivot jobs and investment to energy efficiency and conservation, as well as renewables.

Two-years ago on this date, NJ Governor Murphy passed the “STOP Offshore Oil and Gas” Bill to protect our coast, since then over 10 other states have adopted similar legislation. The impacts from spills and disasters and the pollution from using fossil fuels are reasons why COA urges elected officials to take actions toward a fossil fuel-free future, including denying projects such as NESE.
Posted by Clean Ocean Action at 8:04 PM